Malva neglecta is found throughout the United States, especially the eastern part of the country.

Native to Europe and Asia, many of the Malva species are are used for medicinal purposes, herbal cleansings, tasty vegetables and garden flowers.

Not being native to the United States, the Malva species can become invasive weeds from lawns and gardens to coastal areas and roadsides.

Malva neglecta can be both a winter annual or perennial, depending on the location. It sometimes, but rarely, sprouts as a biennial. It adapts to many soil types and can be very aggressive in disturbed soils, including those with a high manure content.

Malva neglecta stems are hairy and can grow anywhere from 4 to 24 inches long. Stems are open and freely branched and can be decumbent, or running along the ground with tips turned upward. The weed stems can also stand upright, but usually the weed is the combination of the two, decumbent and upright.

The leaves are kidney-shaped, wavy to very crinkled, have toothed edges with 5 to 9 lobes and hair on both sides. They are about 1 to 3 inches wide and are attached off of the stem by a petiole, or small branch.

The leaf node is what connects the petiole and the stem.

Flowers are 1/2-1 inch wide, have 5 petals and are notched at the tip. Colors of the flower can be white, cream, pale purple or pink colored with dark reddish-purple veins. There can be one single flower or clusters of many blooming from the leaf axil, or the angle between the petiole and stem. Mallow flowers resemble small hollyhock flowers. Hollyhock flowers are in the Malvaceae family with the mallows. Hollyhocks, however, are from the Alcea species, where mallows are from the Malva species.

Inside the flower are the fruits that house the seeds by which common mallow reproduces. The fruits are disc shaped of about 10-20 sections that form a ring resembling a cheese wheel or a button. This is where the weed gets the unusual other names of Cheeseweed, Cheeseplant and Buttonweed. As the fruit ripens these segmented discs separate and fall off. Eventually smooth, flat seeds will emerge from the discs with colors anywhere from a reddish-brown to black.

Seeds start to germinate when spring breaks. March and April is when seeds really set but germination continues all the way up until November. Depending on geographic location, flowers bloom from April and May through October.

Although M. neglecta does attract pollinators, don't be fooled by it's beauty and put it in your butterfly garden. Common mallow grows from a thick straight, long taproot that can vary in length. Some of these weeds have a secondary root system. This can be tough to pull and once established, it is difficult to eradicate.

When new growth breaks through soil surface the small stem has two smooth heart-shaped leaves on it. The new plants then forms a rosette where it branches out. Pull the new weed out while it is easy to do.

Other manual weed control methods includes pulling and hoeing the weed and getting the entire taproot system out. Using a pre-emergent herbicide or a propane torch kills the weed seeds.

If the weed is established, using a propane torch can also burn the flowers and the fruits that house the seeds. Non-selective herbicides can be applied throughout summer. Use mulch once the weed is eradicated.

The pictures below are the Malva sylvestris species.
The flower is very similar to Malva neglecta. 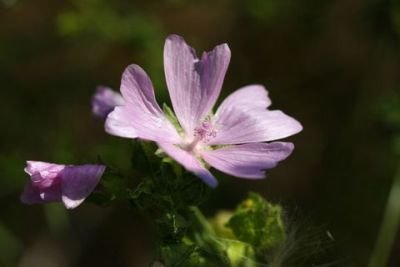 Malva sylvestris leaves, however, are more the shape of a tulip
leaf where Malva neglecta leaves are more kidney-shaped.

Inorganic Mulch Types
Other options for preventing weeds from growing.

Back to Weed Identification

Back from Common Mallow to home page Easy Butterfly Garden