The second of four stages - The Butterfly Larva Stage 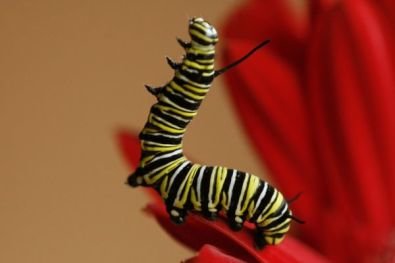 The larva develops inside the butterfly egg. When ready, it chews itself out from the egg and emerges. This is more commonly known as the caterpillar.

After eating the egg, the very hungry caterpillar has little time to rest. The caterpillar begins to eat host plants to store up energy, necessary to successfully transition into the final two butterfly stages.

The correct host plant is important. If the host plant is not suitable caterpillar food to their species, the butterfly larva will starve.

Once emerged the young caterpillars start eating younger, tender leaves
and flower buds. As they
get into their later instars, caterpillars are able to eat older leaves. Instars are
the stages of the cater-
pillar after each molting.

The more butterfly caterpillars eat the bigger they get.

Most are herbivores, there are some species that will eat insects though.


During this process, the first skin is shed, or molted, and replaced with a new and bigger skin. The average caterpillar molts anywhere from four to six times. This is necessary because with the constant eating caterpillars continue to grow and their old skin doesn't stretch to fit.

The new skins, called a cuticle, are growing under the old one that will soon be shed. When the old skin fits tightly the molting automatically is stimulated. The lines of weakness are the splitting line of the cuticle that allows for molting. Molting occurs and along with their new skin the caterpillar also has a new head capsule.

This short video shows the caterpillar molting to a new instar, head capsule and all.  After that you see how eating is serious business.  (no sound)

In the later molting stages
the wings of butterflies begin to develop.

While in the butterfly larva stage, most caterpillars will hide in folded leaves, loose bark or any other inconspicuous area.  They don't want to be exposed making them vulnerable to predators.

Those caterpillars that do feed openly usually possess deterrents to discourage predators. Examples are having a spine to being fowl tasting.

The last stage for the butterfly caterpillar is focused on preparing for the pupa stage. This is called prepupa stage. This is when the caterpillar stops feeding and begin to look for a safer sight and begin resting for pupatation, the third of four butterfly stages. Safe places can be the underside of a leaf, a tree branch, sturdy twigs, and even man made areas that will remain undisturbed.

Get the kids for this one!  Worth watching for 10 minutes.
At 7-1/2 minutes - wow.  Time lapsed misses this detail.
Watching this also shows why butterfly larva need all
that stored up energy.. this is work!  (Nice music)

Hiding is important for survival. Of the hundreds of eggs that a female butterfly may have deposited many don't make it. This is as a result of the many environmental factors they face. The same will happen to caterpillars as they develop.

Still needing to make it through the pupa stage, statistically two of the eggs from the original cluster must survive to ensure the next generation.

This larva stage can vary in length depending on the species.
In warmer climates it is usually over three weeks.
Some butterfly larva may survive long winters and
develop into the butterfly pupa stage in spring.

Many Satyrs and Fritillary caterpillars enter diapause during the larva stage. Diapause is a period of suspending growth, or a delay in development when weather becomes too harsh, as in winter, and food becomes less abundant. This happens to many insects, not all.

The Cabbage White and  Sulphur caterpillars will begin to hibernate, or over-winter. Hibernating is when a species enters a resting state, or becomes dormant.  Not all butterfly species hibernate.

The length of each stage of metamorphosis depends on butterfly species.

Back from Butterfly Larva to home page Easy Butterfly Garden