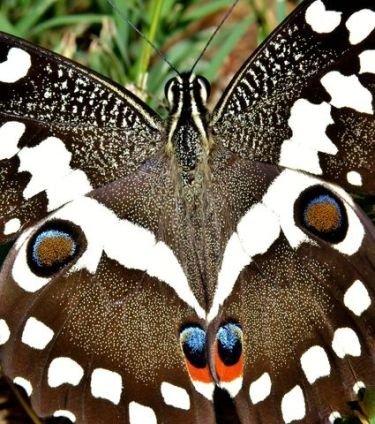 Worldwide there are about 6500 species with 200 of them in North America.

This group is so large that there are many sub-families for these butterfly species which include...

The different characteristic for brushfooted butterflies are the small front legs. Sometimes difficult for the human eye to see, their front pair of legs are smaller in size than others. Because of this they are also called the four-footed butterfly. These small legs allow them to taste their food.

Some have called this small front leg in a developed brushfooted butterfly a Proleg. Technically a Proleg is more common with the caterpillar. Prolegs are not true legs and have no joints.

Colors of every kind are found in the Nymphalidae family.  Orange, red, black and white are common themes used differently and creatively throughout this butterfly species.

Other common species in the brushfooted butterfly family:

Morphogens and the Nymphalidae Family

With the Blue Morpho part of the Nymphalidae family this would be a good time to mention Morphogens. Scientists were curious to know about the development of eye spots on the wings of butterflies in this family.

Through killing and transplanting cells during the caterpillar and pupal stage before the adult butterfly would emerge, scientists were able to take away any eye spots or relocate them to a different place of the wing.

In contrast to the Nymphalidae family, the Pieridae family of butterflies have spots on their wings of a single color. Some of the same genes are shared between families but it is not the same mechanism, morphogens, that produces these spots in the Pieridae family.  Learn more about butterfly colors of wings.

Scales on the wings of the Blue Morpho Butterfly reflect light.

This picture show the iridescence of scattering on wings.  Wing color is actually brown.

Vanessa Butterfly - This is a genus of Nymphalidae that are found throughout the world.  Very familiar names include White and Red Admiral butterflies, Painted Lady butterfly, Purple Emperor butterfly, Small tortoiseshell butterfly, Peacock Butterfly and Comma Butterfly.  Many which are amongst the following pictures of brushfooted butterflies.


Found in southern Canada down to most of United States except many southern border states.

Preferring wooded areas but can be seen in gardens.  Host plants are violets.

Found in Great Britain, across Europe, Asia and into Japan.  This butterfly can be seen flying in wooded areas to rocky banks where host plants of wild violets can be found.

Found throughout North America in the mountain regions of the west.  Host plants are violets.

Seen throughout the Gulf of Mexico from southern border U.S. states to areas of Central America, Mexico and Caribbean.

This is a large butterfly averaging over 3 inches (8 cm).  Because host plants are poisonous, butterfly larva are toxic to predators.

Found in Central America, Mexico and Costa Rica we are more familiar with the Blue Morpho, but there are a small number that are white.

See also the picture of the White morpho's wings filling with hemolymph.

Not strong fliers they don't wander far from their preferred water and shoreline climates.

With about 25 species, the cyrestis genus is found throughout south-east Asia, Thailand and Malaysia to India and beyond.

See detail of wings of map-wing on the Exotic Butterfly page.

Averaging just over 3 inches (9 cm), there are 24 species withing this genus.  It is found throughout Northern Africa, China, Malaysia, Thailand to India, Nepal and Australia.  Host plants include Albizia, Celtis and Rhamnella.

The sub-family is Danainae, which their only host plants are milkweeds.  Primarily Monarch's are found throughout southern Canada, United States, Central America and northern South America.  More at mimicry and the butterfly migration pages.

Caterpillars feed on Passiflora, which are poisonous.  From the Heliconiinae sub-family, colors resemble Tiger Longwing (below).  Batesian mimicry is prevalent within species.  They are also known for their sexual dimorphism.

Known as a true brushfooted butterfly, Pearl Crescent is found throughout the United States except for the west coastline.  Very distinguishing to the males are the black tips of the antennae.  Males also prefer patrolling for females in open fields.

The Red Admiral is found in warmer areas of North America, Asia and Europe but will travel north and hibernate.  These, along with Monarch's, are considered easier to raise than many other butterfly species.  See the how to raise butterflies page and their host plants.

Found in tropical areas of Central and South America, Piano Key Butterflies colors vary but the backwings edge show the variation of trailing colors.  They are a hybrid of the Postman Butterfly, also H. melpomone.

Depending on light hitting wings, butterfly colors can appear vibrantly blue to dark and ruddy.

Found in Europe and Asia, this picture is the male.  The female is also beautiful with more brown throughout her wings with cream to rose pastel colors, rarely hints of purple.

Depending on region, sexual dimorphism and polymorphism within species is common.

Butterfly Wings -
The wings of butterflies are precision flying machines.

Little White Butterflies -
You've seen them, they're all over.

Back from Brushfooted Butterflies to home page Easy Butterfly Garden